The vessel that carried Charles Darwin on his voyage of discovery 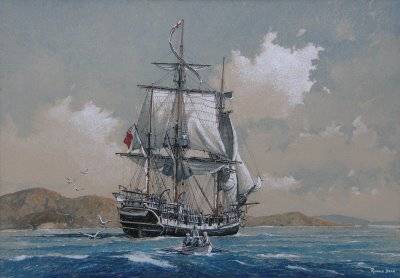 HMS Beagle was commissioned in 1820 as a 10-gun brig, but never sailed as such, except on a ceremonial voyage to London.  After lying “in ordinary” (laid up) for five years, she was refitted as a six-gun barque (with the addition of a mizzen mast and the removal of four guns).  From 1826 through 1830, it participated in a hydrographic survey of Patagonia and Tierra del Fuego.  During this extended voyage, the commanding officer became despondent and committed suicide.  Flag Lieutenant Robert Fitzroy was eventually appointed to command HMS Beagle for the remainder of the survey.  It was during this voyage that the Beagle Channel was identified and named.  When the Beagle was tasked with a second and more extensive survey mission, Fitzroy as re-appointed to command.  Concerned about the isolation of command and the dearth of geologic experience among the available officers, he sought a qualified companion.  His superior recommended Charles Darwin, a self-taught naturalist.  HMS Beagle departed Plymouth on 27 December 1831, returning on 2 October 1836 from one of the most significant voyages in history.  It was during this voyage along the coasts of South America, the Galapagos Islands, the South Pacific, New Zealand, and Australia, that Darwin made the observations that led him to formulate the theory of evolution.  HMS Beagle’s third and last voyage consisted of an extensive survey of the Australian coast.  It was during this voyage that the port of Darwin, Northern Territory, Australia was first charted and named.   Following completion of this voyage, HMS Beagle was decommissioned and refitted as a static coastguard watch vessel, anchored in the River Roach on the Essex coast to impede and interdict smugglers.  In 1871, the vessel was removed from government service and sold for breaking up.