Hijacking of the SS Santa Maria

First ship to be attacked by terrorists after World War II 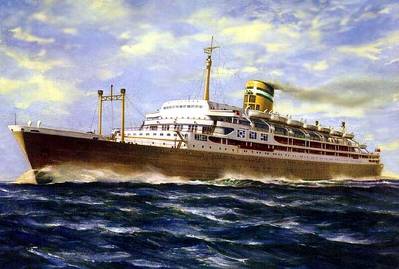 The modern world’s first maritime hijacking did not involve the Achille Lauro, but occurred on January 23, 1961 when 24 Iberian rebels took over the Portuguese passenger ship SS Santa Maria.  The goal of their leader, Henrique Galvão, was to focus attention on the brutal regime of long-time Portuguese dictator Antonio Salazar and, as an added bonus, the similarly brutal regime of Spanish dictator Francisco Franco.  He also wanted to rid Portuguese overseas territories, primarily Angola and Mozambique, of their oppressive colonial governments.  The rebels had boarded as passengers, some in La Guaira, Venezuela and others in Curacao.  They had weapons hidden in their luggage.  The rebels stormed the bridge early on the morning of January 23.  While the plan called for a peaceful takeover of the Santa Maria, the third officer (who was the officer of the deck at the time) resisted and was shot dead.  Several other crewmembers were wounded in the ensuing confusion.  The rebels forced the ship to cease all communications and turned the ship southeast, toward Angola.  After several days of searching for the missing ship, it was located by a group of US Navy vessels.  The rebels diverted toward Recife, Brazil, all the time surrounded by the Navy warships.  Upon entry of the Santa Maria into Recife, the rebels surrendered to Brazilian authorities and were granted political asylum.  The 600 passengers and 300 crewmembers of the Santa Maria were freed.  Henrique Galvão later tried to justify his actions in his book “Santa Maria: My Crusade for Portugal”.  Salazar remained in power in Portugal until 1968, when he suffered a brain hemorrhage.  The dictatorship remained in control, albeit with a different leader.  Salazar finally died in 1970.  Henrique Galvão remained in exile in Brazil until he, too, died in 1970.  The overseas territories were granted their independence after the 1974 revolution in Portugal.