A major player in the planet’s biosphere. 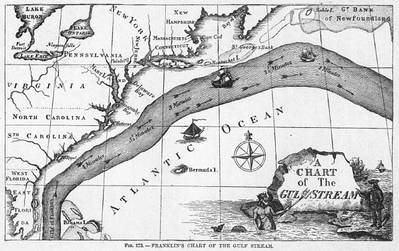 The Gulf Stream is the second most powerful ocean current, exceeded only by the Antarctic Circumpolar Current.  It flows out of the Gulf of Mexico, around the Florida Peninsula, up the North American Atlantic Coast as far as Newfoundland, and then eastward across the Atlantic Ocean.  It averages 60 miles wide and 3,000 feet deep, with a speed of about five knots and a flow rate of 30 million cubic meters per second.  About two-thirds of the way across the Atlantic, the Gulf Stream splits in two.  The North Atlantic Drift moves northeasterly to the British Isles and Scandinavia.  The other part moves southeast along the coast of Europe and on to North Africa, where it becomes part of the North Atlantic Gyre and eventually re-crosses the Atlantic to start the process anew.  The Gulf Stream is a significant factor in heat transport from the tropics to the northern polar region, cooling the North Africa and northern South America while warming eastern North America and northwest Europe.  The Gulf Stream was noted in passing by early Spanish and English navigators.  It was not until it piqued the interest of Benjamin Franklin that the phenomenon was explained in detail.  Conversing with ship captains and examining log books, Franklin concluded in 1769 that a great river started in Florida and moved clockwise through the North Atlantic to Europe.  He suggested that ships sailing from North America to Europe should follow the river and ships sailing the opposite direction should avoid the river.  American masters, some of whom were already somewhat aware of its existence, enthusiastically adopted the practice.  British masters, more hidebound and less enamored with Colonial advice, declined the advice for many years.  Nowadays, there are efforts to harness the power of the Gulf Stream with current turbines on the seabed off the coast of Florida.  No one ignores the Gulf Stream any longer.