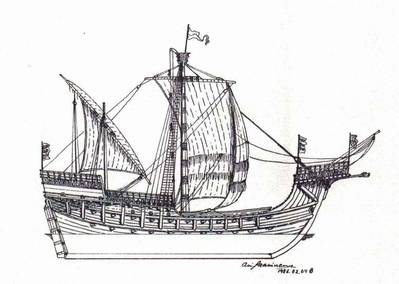 The warship Grace Dieu (Grace of God) was built in 1418 in Southampton, England as the flagship of small naval fleet of King Henry V.  It was one of the largest ships of its era, being 218 feet in length and with a beam of 50 feet.  As usual for the time, it was clinker-built, but since it was a warship, the hull was comprised of three layers of wood with moss and tar between the adjoining layers.  Thousands of oak and beech trees, along with a number of ash, well felled to provide material for its construction.  Grace Dieu had two masts.  The mainmast was fitted with one large square sail.  The mizzen mast was lateen rigged.  It had a slightly raised poop and a very high forecastle.  The forecastle was a holdover from older ship design and usage, the name being derived from ‘forward castle’.  It was crewed by about 250 sailors and marines.  It carried a number of small cannons, used mostly for defensive purposes.  In combat, the marines would gather on the large and high forecastle to rain arrows and other missiles onto the enemy.  Grace Dieu, though, never saw combat.  Henry V had largely defeated his French opponents of the Hundred Years War (Agincourt was fought in 1415), giving him control of northwestern France.  The ship made one sortie in 1420 and then returned to Southampton where it spent the majority of its time tied to the dock performing ceremonial functions.  In 1439, it was struck by lightning and burned to the waterline.  The burned-out hull was towed up the River Hamble and largely abandoned.  The remains of Grace Dieu were discovered in 1933, designated under the Protection of Wrecks Act, and partially excavated.  The remains of the companion vessel Holigost (Holy Ghost) were discovered nearby in 2015.