The Global Positioning System is highly precise, but not error-free

The Global Positioning System (GPS) was initiated by the US Department of Defense (DOD) as a position-finding system to be used for military purposes. Originally, it was envisaged for use by nuclear submarines so that they could better aim their ballistic missiles. The system was so good that it rapidly expanded to other military uses. When other federal agencies and foreign governments learned of the system and clamored for access, DOD made a somewhat degraded version publicly available. After further pressure was asserted, DOD made the high-precision signals available to all users. Russia has its own version of GPS called GLONASS, although its constellation of satellites is not as large as that of the United States (currently 24). China, Japan, India, and the European Union have initiated their own GPS programs. GPS receivers are now fairly inexpensive and have become ubiquitous. They are found on the bridge of almost every ocean-going ship in the world and are so relied upon that many mariners fear that traditional methods of position-finding, such as use of the sextant, will no longer be practiced.
While GPS is capable generally of identifying the position of the receiver within several meters, the accuracy may be degraded in a variety of manners. Because the radio signal transmitted by the satellite is weak, it is readily subject to interference. This interference may be generated by a number of sources. Space weather, such as solar flares, may disrupt the signal. Metal in the vicinity of the receiving antenna may degrade the signal (this is a particular problem for portable GPS devices used in cars and on boats). Man-made electro-magnetic interference (EMI) is a growing problem. In 2001, GPS reception in and around Moss Harbor, California was blocked. It took about a month to determine that this interference was caused by a defective television antenna on a recreational yacht docked at a local marina. Similar accidental interference has been experienced elsewhere at different times.  Intentional jamming of GPS signals was utilized sporadically by the by Iraqi forces during the Iraq War. There is now concern that terrorists might use GPS jamming to disrupt shipping and possibly induce collisions and groundings. Trinity House in the United Kingdom has commenced tests to determine the susceptibility of ships to such GPS errors.
The take-away is: Don’t yet throw out your sextant. 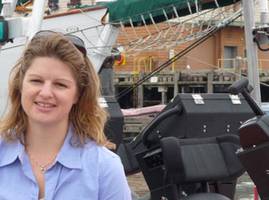