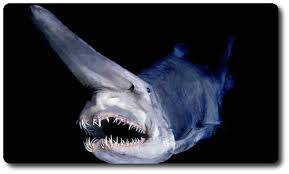 All, or almost all, sharks look scary, because we know they are among the top predators in the ocean.  The goblin shark, though, looks particularly frightful because it is downright weird.  In addition to having a twelve-feet-long body that looks like a cross between a shark and sturgeon, there is a large snout projecting three or four feet from between the eyes.  Below the snout is a gapping mouth that more closely resembles those depicted on meat-eating dinosaurs.  The goblin shark is the last surviving member of an ancient family of sharks whose other members went extinct about 40 million years ago.  Fortunately, the goblin shark prefers deep water, largely inhabiting continental slopes, submarine canyons, and seamounts at depths greater than 300 feet.  For that reason, they are seldom seen and rarely brought to the surface.  In late April 2014, a fisherman off the west coast of Florida found one in his shrimp trawl.  It was the second one known to have been found in the Gulf of Mexico.  While found in all tropical and temperate oceans, most have been retrieved off the coast of Japan.  Using jaws lined with nail-like teeth, the goblin shark feeds mostly on fish, squid, octopus, and crustaceans.  The snout is particularly sensitive to the minute electric fields produced by its prey.  The jaws open extremely wide, making escape difficult.  It is unclear how many goblin sharks there are, but their worldwide distribution, preference for great depth, and lack of targeting by humans has resulted in the species being designated in the category “least concern” to conservationists.