The first vessel to transit the Northwest Passage. 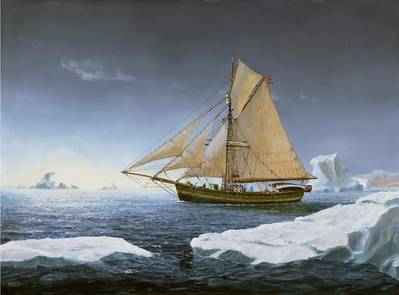 The Gjøa is a 70-foot long, 48-ton sloop with a 13 horsepower marine paraffin auxiliary engine powering its single screw.  It was built in 1872 (without the engine or screw) by Kurt Skaale, who named it for his wife.  The vessel was used in the herring fishery until purchased in 1900 by Roald Amundsen for his attempt to transit the Northwest Passage across the top of Canada.  Amundsen had the engine and screw installed because the Gjøa was a sluggish sailing vessel.  He liked it though, because it was sturdy and had a shallow draft.  It was also as substantial a vessel as he could afford.  Amundsen had participated in one Antarctic expedition, but this would be his first extended voyage in the Arctic.  He decided that a large expedition would be unfeasible.  A small expedition, taking its time and living off the land (and sea) like the native Inuit, would have a greater chance of success in his opinion.  Gjøa, with its crew of seven (including Amundsen), departed Christiania (later renamed Oslo), Norway on June 16, 1903.  After crossing the Atlantic Ocean, the Labrador Sea, and Baffin Bay, it entered the Northwest Passage.  In late September, it entered Uqsuqtuup Harbor on the south shore of King William Island and was soon iced in.  For the next two years, Amundsen and the crew learned survival skills from the Inuit.  They made sledge journeys to make scientific measurements and observations.  The Gjøa got underway again on August 13, 1905, leaving what has since been named Gjøa Harbor, headed west.  In October, the vessel was beset again, this time at Herschel Island, near the Canada-United States border in the Beaufort Sea.  Amundsen skied single-handedly 500 miles to Eagle, Alaska to report the expedition’s progress.  He then returned to the vessel and its crew.  The vessel remained beset until July 11, 1906.  It reached Nome on August 31 and then San Francisco on October 19, where the expedition received a heroic reception.  The large Norwegian-American community in San Francisco was particularly proud of the accomplishment.  Norway had only recently achieved full independence from Sweden and Amundsen became its first national hero.  The local community purchased the Gjøa and it was put on display in Golden Gate Park.  The Gjøa was returned to Norway in 1972 and is now exhibited at the Norwegian Maritime Museum in Bygdøy, Oslo.