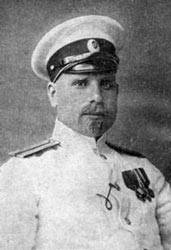 Georgy Sedov (1877-1914) was born into a fisherman’s family on the shore of the Sea of Azov.  After finishing navigation courses in Rostov-on-Don and acquiring some sea time, he took an external degree in the Imperial Naval College and was commissioned a Lieutenant in the Russian Imperial Navy in 1901.  Coming from a peasant background, he was not considered for choice assignments.  In 1902-1903, he participated in a hydrographic expedition in the Arctic Ocean, still largely unexplored.  There, Sedov found his calling.  He served honorably but without distinction in the Russo-Japanese War where he commanded a torpedo boat.  He returned to the Arctic in 1909, leading an expedition charting the mouth of the Kolyma River.  In 1910, he explored Krestovaya Bay in the newly-discovered Novaya Zemlya Islands between the Barents and Kara Seas.  In 1912, he proposed an expedition to the North Pole, but was ignored by the Imperial Government.  After appealing to the public for donations, he acquired the ship Svyatoy Muchenik Foka (Saint Martyr Foka) and departed Archangel in August 1912 with four scientists and a crew of seventeen.  The ship wintered over near Novaya Zemlya and then reached to southern islands of Franz Josef Land in August 1913.  Plans called for wintering over once again and then assembling a small team to travel to the North Pole on sleds pulled by dogs during the short Arctic summer.  The crew was running out of food, though, and members were suffering from scurvy.  Sedov decided that he could not wait until summer.  With two volunteers, he departed the ship on 15 February 1914.  The reached Rudolph Island, the northernmost portion of Franz Josef Land on 5 March.  Sedov died shortly thereafter and the remaining two men struggled back to the ship, which returned to Archangel in late August 1914.  By then, Russia was fighting World War I and the expedition attracted little attention.  It was only after the war that the new Soviet Government became interested in Arctic issues and Sedov’s achievements.  In 1929, the government acquired a reinforced steamship for use as an icebreaker.  They named their new vessel Sedov in honor of the fisherman’s son.