Gender Discrimination in the Pacific Northwest

Who should pay for a $6 million gender discrimination lawsuit involving a woman who was denied a pilot license in Puget Sound? 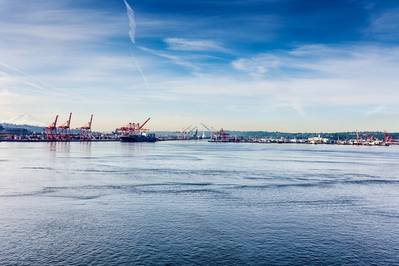 In 2016, a jury awarded a woman $3.6 million in a gender discrimination lawsuit filed against the Puget Sound Pilot Commission, a Washington State agency. The woman, a former deep draft vessel master, was awarded the money after she was denied a state pilot license. She was the first woman to successfully apply and enter the training program to be a Puget Sound pilot.
Following the multimillion-dollar jury verdict, the State of Washington filed an appeal. But at some point the State halted their appeal and entered into settlement negotiations with the plaintiff, resulting in a doubling of the jury award, bringing the total settlement to just over $6 million.
The training program for pilot candidates is essentially managed by pilots – assessing and evaluating the trainees. Pilots ultimately provide the key input and recommendations to the Washington State Board of Pilotage Commissioners as to whether to license a pilot candidate or not. In this particular case, the pilots recommended that the Board not issue a pilot’s license, and the Board concurred. In the end, the State lost the gender discrimination lawsuit and paid a $6.1 million settlement.
The Pilot Commission operates with limited funds, and all costs for pilotage are ultimately borne by the users of the pilot service that provide revenue via a mandatory tariff set by the state. Given the budget of the Pilot Commission and how the state of Washington funds settlements and lawsuits, ocean carriers who are required by law to utilize Puget Sound Pilots may be forced to pay a lawsuit settlement they had no role in. These day-to-day users of pilot services don’t really know anything about the pilot training program other than a trainee might be on the bridge of their ship. Any performance evaluation, critique, or review of the individual pilot would not be known by a ship operator coming into Puget Sound. Still, ocean carriers may be tapped to become the financial backstop for the acts of others.
Pilotage in Puget Sound, like most ports across the nation, is mandatory and provided by an exclusive monopoly. The fate of pilot trainees is a function of the training and subsequent evaluations done by their potential future business partners.
At the state Capitol, PMSA has been pointing out the unfairness of this situation and has received acknowledgement from legislators and the Governor’s office about the absurdity of ocean carriers taking on this cost burden. While state mandated pilotage has a long tradition in this country, this case illustrates a need for a fresh look. PMSA is working to ensure that the underlying discriminatory behavior identified by the court will be changed and be prevented going forward; but it also requires that full responsibility be placed on those who were the cause of such actions.
Note: John McLaurin is president of the Pacific Merchant Shipping Association. This piece was originally published in the PMSA West Coast Trade Report.