First animal to be protected by an international conservation treaty 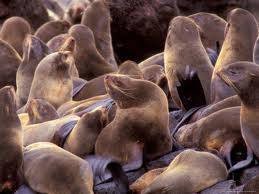 The northern fur seal is the only fur seal residing in the northern hemisphere.  With the other fur seals and the sea lions, it is classified as a pinniped, meaning that it has external ears, relatively long and muscular foreflippers, and the ability to walk on all fours, because it can rotate its hindflippers forward under its body.  It is also pelagic, spending much of its life at sea, coming ashore largely to breed and raise young.  Fur seals have a coat of dense underfur intermixed with guard hairs.  This fur can be extremely soft, making fur seal pelts a potentially valuable commodity.  This particular feature almost eradicated the various fur seals.  The northern fur seal is found in waters of the North Pacific Ocean, the Bering Sea, and the Chukchi Sea, but breeds almost exclusively on the Pribilof Islands in the Bering Sea off the coast of Alaska.  In what was then called “Seward’s Folly”, the United States purchased Alaska from Russia in 1867.  The acquisition included the islands and waters west of an agreed dividing line.  The Pribilof Islands were included in the acquisition.  Fur seals had been hunted by native Alaskans for centuries, but not intensely.  This changed in 1786 when the Russian navigator Gavriil Pribylov visited the islands, which now bear his name.  He and his crew commenced the commercial hunting of the northern fur seal.  In both 1868 and 1873, the US Congress passed legislation severely limiting the killing of northern fur seals.  While largely successful in protecting the rookeries on the islands, the laws had little impact on the killing of these seals in the waters more than three nautical miles offshore (pelagic sealing), particularly from non-US vessels.  The problem was that most of the seals taken in this manner were nursing females.  When they died, so too did the pups waiting ashore, who died of starvation.  British Columbian sealers were particularly prevalent in the Bering Sea.  After a number of British Columbian vessels had been seized by US Revenue Cutter Service vessels enforcing US law, the British Government (on behalf of the Dominion of Canada) entered into diplomatic arbitration with the US Government regarding US jurisdiction.  The arbitration ended in favor of the British position, but both sides agreed that measures must be adopted to protect the northern fur seals from unrestricted hunting.  At about this time, Japan also started hunting the northern fur seal.  After several years of negotiation, the United States, Great Britain, Japan, and Russia signed the North Pacific Fur Seal Convention of 1911.  The Convention outlawed pelagic sealing and acknowledged US jurisdiction over on-shore hunting of the fur seals for commercial purposes, becoming the first international treaty to address wildlife preservation.  The United States imposed a five-year moratorium on seal hunting (excepting native Alaskan traditional hunting) so as to allow the herd to recover.  The Convention lapsed with the outbreak of World War II and has since been replaced by the Fur Seal Act of 1966 and the Marine Mammal Protection Act of 1972.