3,200MT jacket transported from South India to the KG basin on the West coast of India 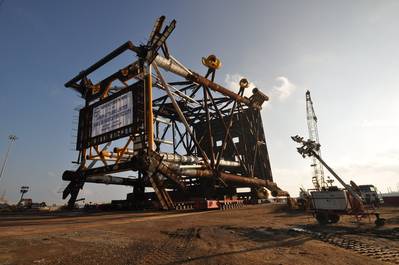 With the growing competition in heavy lift forwarding arena, Freight Wings Pvt. Ltd. (FWPL), has diversified into various related activities in order to gain an edge over others in this niche sector.  One such additional activity it now undertakes is on-site erection of project cargo. As a result it enjoys a robust all round growth even in the offshore sector where a frenzied search for oil and gas is underway.

Recently the FWPL claims to have executed a demanding transport operation of the heaviest ever over dimensional unit in South India. It loaded out a 3,200MT jacket at Larsen & Toubro’s (L&T) Kattupalli facility at Chennai. The jacket was then transported by barge along the coast to the Krishna Godavari basin on the East Coast of India. According to the spokesman of the company it was a unique operation made possible by the company’s innovative ability and expertise.

Explaining the intricacies of the transport and handling operation Amit Koul, General Manager of Freight Wings stated, “L&T had fabricated the jacket for the Gujarat State Petroleum Corporation (GSPC), for installation in the process platform in Deen Dayal West (DDW) block in KG basin on East Coast of India. Our responsibility was to undertake complete transportation including the loadout engineering of the jacket and the execution including mooring of the barge and ballasting / deballasting during the loadout. The mammoth jacket measuring a 67.1m x 47.3m and 45.3m was moved by us on 102 axle lines from its place of fabrication at the L & T facility and then rolled onto a 400 class barge “Posh Giant 1”. The loadout operation started in the early morning rising tide of 7 December and was completed before mid-day, according to the given schedule.”

After fastening the jacket for the sea voyage the barge, “Posh Giant” sailed for the offshore installation site near Kakinada on the East coast of India. Four days later the barge reached its offshore installation site. The following evening, a dual crane lift was performed by the installation barge “SSCV Hermod” (of Heerema Marine Contractors) and the jacket was lifted, upended and set down (within tolerance) the following day in the late evening hours, at Deen Dayal West Field, East Coast of India. The floating Crane “SSCV Hermod” is capable of a tandem lift of 8,100 tonnes. The vessel has an overall length of 154 meters (505 ft) and a width of 86 meters (282 ft).

Apart from the 102 hydraulic axle lines, FWPL also had to use their deck mounted 400 tons / hr ballast pumps for ballasting the barge and the two 20-tonne mooring winches for securing the barge during loadout. FWPL also employed four primary and two secondary (contingency) mooring slings for holding the barge steady during the Loadout. The length of the mooring slings varied between 100 to 150 metres.

FWPL submitted all the required Loadout related documents / calculations to the Marine Warranty Surveyors, M/s Mathews Daniels (Dubai) and got it approved from them, well before the actual Loadout.