The passing of a literary giant 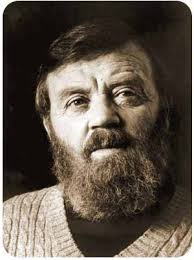 Farley Mowat, age 92, died on 6 May 2014.  In a fifty year career, the Canadian author wrote more than forty books and was awarded numerous honors including the Governor General’s Literary Award and the Order of Canada.  His obituary described Mowat as “a trickster, a ferocious imp with a silver pen, an ardent environmentalist who opened up the idea of the North to curious southerners, a public clown who hid his shyness behind flamboyant rum-swigging and kilt-flipping, and a passionate polemicist who blurred the lines between fiction and facts to dramatize his cause.”  He was most noted for the book Never Cry Wolf, based (somewhat loosely) on his experience studying the canine in Northern Canada.  Most of his books had environmental themes.  His book The Dog Who Wouldn’t Be has been called one of the best children’s books of all time.  I was first introduced to Farley Mowat, though, by the sea-going classic The Grey Seas Under.  This nonfiction book traced the history of the tug and salvage company Foundation Maritime of Halifax, Nova Scotia.  The centerpiece of the book was not the company or its members.  Rather, it was the salvage tug Foundation Maritime.  A former Royal Navy tug, it had been sold to a German company in 1924 before it was acquired by the Canadian company in 1930 and devoted to salvage work.  The book tells the story of the many daring rescues and other missions of the ship during the Depression years and through World War II.  The book finishes with the ship’s last epic voyage, salvaging and towing a distressed cargo vessel through hurricane-force winds in the North Atlantic in January and February 1948.  I and many other readers were enthralled by the story and particularly by Farley Mowat’s amazing ability to bring these adventures to life.  He will be missed.