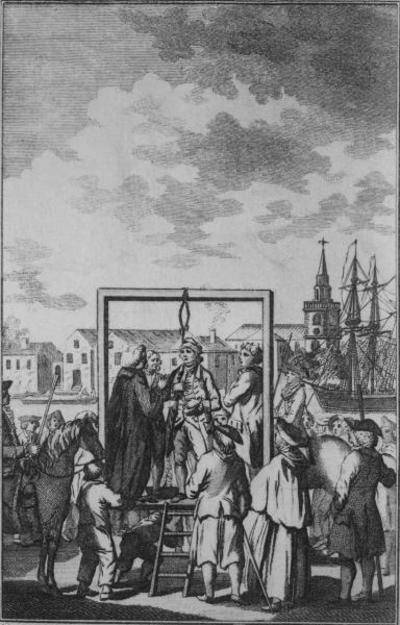 During the era when Britain ruled the waves, the High Court of Admiralty was a force to be reckoned with. While the Admiralty Court served at the pleasure of the King, it was independent from the courts of the land. The major constraint on its jurisdiction was that it could only adjudge cases arising at sea. Initially, its jurisdiction was limited to murder, mutiny, piracy, and prizes. Jurisdiction was later expanded to include all crimes committed at sea, as well as cases involving shipping, collisions, and salvage. The Admiralty Court’s lasting reputation though revolves around its unique method for execution of convicted criminals. Many crimes back then were punishable by death. In order to carry out the death sentence will minimal interference from those pesky landlubbers, the Admiralty constructed a special dock on the River Thames just downstream from the Tower of London. It was called Execution Dock and remained in use until the early nineteenth century. The procession to the gallows was led by the Marshall carrying a silver oar, representing the authority of the Admiralty. After execution, the body was chained to a stake at the low water mark, where it was left until it had been washed over by three tides. If the prisoner had been convicted of piracy, the body was covered in pitch and placed in a close-fitting metal cage (gibbet) to be displayed from a tower on Graves Point at the mouth of the Thames as a deterrent to others. Captain William Kidd, who engaged in piracy off the east coast of Africa (in the vicinity of modern-day Somalia) in the 1690’s, was hanged at Execution Dock on May 23, 1701. His gibbeted body was displayed at Graves Point for twenty years. The final hangings at Execution Dock occurred on December 16, 1830. In 1875, the High Court of Admiralty was merged with the landside courts into the High Court of Justice. But even now, when the Court is hearing a case in Admiralty, the traditional silver oar is displayed on the wall behind the presiding judge.