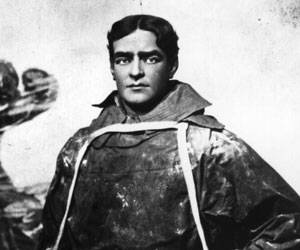 Ernest Shackleton (1874-1922) was a British mariner and polar explorer, active during the Heroic Age of Antarctic Exploration.  He joined the British merchant marine at age 16 and sailed world-wide until 1900, when he talked his way into the position of third officer on the National Antarctic Expedition ship Discovery.  This was a major step down for an officer who held his master’s license, but a clear indication of how much he wanted the assignment.  The expedition’s leader was Robert Falcon Scott, a Royal Navy Commander at the time.  During the 1901-03 expedition, Shackleton accompanied Scott and Edward Wilson on a march to achieve the Farthest South latitude (82°17’S) up to that date.  Shackleton, though, became ill on the return march and had to leave the expedition and return to Britain.  In 1907, he returned to the Antarctic as leader of the Nimrod or British Antarctic Expedition.  They achieved a new Farthest South latitude (88°23’S), completed the first ascent of Mount Erebus, and discovered the approximate location of the South Magnetic Pole.  After several years of planning, Shackleton put together the Imperial Trans-Antarctic Expedition.  The goal was to complete the first crossing of the continent, marching from the Weddell Sea to the South Pole and then continuing on to McMurdo Sound in the Ross Sea.  Preparations were not completed until 1914.  Despite the outbreak of the Great War on August 3, First Lord of the Admiralty Winston Churchill ordered that the expedition go forward.  The ship Endurance departed Britain on August 8.  The Endurance arrived in the Weddell Sea in January 1915, only to find severe ice conditions.  It was beset in the ice on January 19.  The expedition wintered over on the ship.  Conditions only got worse with the arrival of spring in September.  The ice began moving, putting tremendous pressure on the hull.  The Endurance finally sank on November 21, but not before Shackleton was able to evacuate all personnel and most of the supplies onto the ice.  After the ice began to break up, they rowed the three lifeboats to Elephant Island, a distance of over 300 miles.  Realizing that the island was not hospitable to long-term settlement and that the likelihood of outside relief was very low, Shackleton had one of the lifeboats made more seaworthy.  He and five others sailed 800 miles across the stormy Antarctic Ocean to South Georgia Island where a whaling station was located on the north coast.  Landing in foul weather on the south coast, and not trusting the leaking lifeboat to make it around the uncharted shoreline, Shackleton and one other man hiked over the treacherous mountain ridges to reach the whaling station.  A boat was dispatched to the south coast to pick up the other men.  Shackleton then assembled a makeshift relief expedition to go to Elephant Island.  He and the relief ship reached Elephant Island on August 30, 1915, rescuing all 22 men.  Shackleton and his men returned to Britain in May 1917 to find the nation fully engaged in war and having little interest in the Antarctic expedition.  Shackleton did, though, eventually receive various awards, including an appointment as an Officer of the Order of the British Empire (OBE).  In 1921, he organized another expedition, with the goal of completing the first circumnavigation of the Antarctic continent.  Shackleton, though, died of a heart attack on January 5, 1922, shortly after the expedition arrived at South Georgia Island.  At the request of his widow, Ernest Shackleton was buried on the island.  Initially, the public showed little appreciation of his efforts, but over time, his amazing rescue of all persons on the aptly-named Endurance expedition was recognized as an outstanding achievement.

Out of the Eye … and Staying There

Message to shipping is, use clean fuel and save lives