A large atoll in the central Pacific Ocean 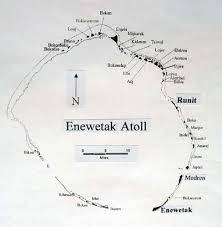 Enewetak Atoll (previously referred to as Eniwetok Atoll) is a large coral atoll in the central Pacific and is part of the Republic of the Marshall Islands.  It consists of about 40 small islands grouped around a large and deep lagoon.  The islands have a total area of just over two square miles, with a mean elevation of ten feet above sea level.  The current population is about 800 individuals.  The seamount that formed the atoll submerged slowly millions of years ago.  As it submerged, coral reefs formed around its edges.  These coral reefs now form the basis for the atoll.  The atoll has been inhabited for about 3,000 years.  The Spanish explorer Alvaro de Saavedra landed at the atoll in 1529.  He named the atoll Los Jardines (The Gardens) because of its beauty and the friendliness of its inhabitants.  The atoll was largely ignored by Europeans until 1885 when the Germans established trading posts throughout what was called the Imperial German Pacific Protectorates.  The Protectorates were occupied by Imperial Japan during World War I and Japan was subsequently awarded a mandate over the central Pacific islands by the League of Nations.  In 1942, Japan built an airfield on Enewetak Atoll.  American forces captured the atoll in February 1944, expanding the airfield and using the lagoon as a major forward naval facility.  With the end of World War II, the region became the US Trust Territory of the Pacific Islands.  With the start of the Cold War and the nuclear arms race, Enewetak and Bikini Atolls were converted into nuclear bomb test sites.  The local residents were evacuated.  Between 1948 and 1958, forty-three atomic and hydrogen bombs were detonated at Enewetak Atoll.  Subsequently, the most heavily contaminated topsoil was scrapped off and buried in an atomic blast crater on the northern end of the atoll’s Runit Island.  A dome consisting of 358 concrete panels, each eighteen inches thick, was placed over the nuclear waste.  The US government declared the southern and western islands of the atoll to be safe for human habitation in 1980 and many residents returned.  In 1983, the Republic of the Marshall Islands (RMI), a newly-declared independent nation is free association with the United States, was established.  The Compact of Free Association between the US and the RMI established a $150 million trust fund for payment of damages and injury resulting from the nuclear testing program.  The trust fund has been depleted over the years and a lawsuit by Marshallese seeking additional compensation has been dismissed by the US Supreme Court.  Evidence indicates that the concrete cap or dome over the nuclear waste material on Runit Island, referred to informally as “The Tomb”, has seriously deteriorated.  Additionally, sea level rise may put it under water.