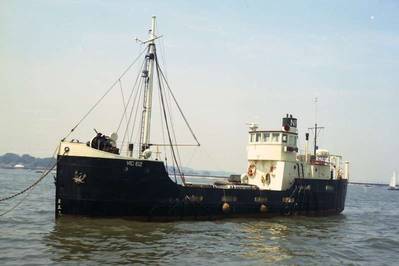 Empire ships were a diverse group of small to midsize noncombatant ships built in or for Britain during World War II.  They ranged from harbor craft to ocean-going freighters and tankers.  Some even carried one (or up to four) aircraft for responding to U-boat attacks.  The aircraft were mounted on rails and launched by means of a rocket-propelled catapult.  Many of the early vessels had coal-fired steam propulsion, Britain at the time having numerous coal mines and no indigenous oil reserves.  The vessel designs emphasized simplicity, so that they could be constructed quickly and in smaller yards.  The larger ones shared many characteristics with American Liberty ships and served as general cargo vessels and as tankers.  Numerous coasters, both general cargo and tanker types, were constructed for operations in waters in and around the British Isles.  Tugs of various types, including rescue tugs, deep sea tugs, and harbor tugs, were also produced.  A particularly interesting type was the victualling inshore craft or VIC, used primarily to supply general ship stores to Royal Navy combatants in port or at anchor.  They were generally 100 to 150 feet in length with a cargo capacity of 150 to 200 tonnes.  The deck house was aft, above the engineroom, and most had a single hold.  About 100 VICs were built and a few are still afloat.  Along with the mass-produced US Liberty and Victory ships, the war might not have been won without the vital, but unheralded, services provided by the Empire ships.