With the development of the deepwater 'pre-salt' fields in Brazil, new specialized Subsea companies are being established in Rio de Janeiro and Macaé. DOF Subsea is on the top of the list of these new companies, bringing vast Subsea experience and state of art technology to the Brazilian offshore industry. 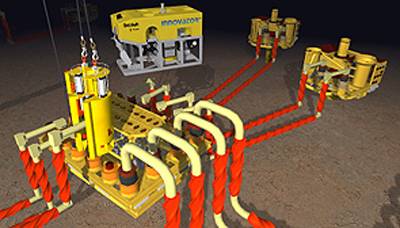 The DOF Subsea Group is a specialized subsea service company that provides survey, construction, inspection, repair and maintenance services which involve complex and challenging engineering in an international environment.
Their main business activities are project management, engineering, vessel operations, survey, remote intervention and diving operations, primarily for the oil and gas sector, on a worldwide basis.
As part of its strategy to extend its presence to all the key offshore regions in the world, DOF Subsea established DOF Subsea Brazil, in 2006.
Offices and base facilities are located in the city of Macaé, the Brazilian oil capital, which is about 3 hours northeast of the city of Rio de Janeiro.
The company inicially focused its activities in Brazil on ROV construction support services but has expanded to offer a full range of services including offshore survey, IRM, construction support and subsea engineering.
DOF Subsea Brazil has built and is still building next generation support and survey vessels in Brazilian shipyards, sharing technology, upgrading the shipyards and creating much needed jobs in this important maritime sector also.
In 2007, the company was awarded a contract by Chevron Brazil to supply a new MSV, to support Chevron´s Frade subsea system development.
In 2008, DOF Subsea and Technip anounced that their 50/50 joint venture was awarded a four year charter contract by Petrobras, worth about US$250 million, for a new pipelay vessel to install and retreive pipelines in depths up to 2,000 meters in Brazilian waters.
Finally in September 2009, DOF Subsea UK, another subsidiary of the DOF Subsea, was awarded a contract of more than US$ 3 million by Technip to provide survey and positioning services with the Deep Constructor and the Skandi Achiever vessels, for the Tupi ‘pre-salt’ field in the Santos Basin.
This field is acknowledged as the biggest of all the ‘pre-salt’ fields discovered to date, and many specialists believe that it is the biggest field to be found in Brazil.
By no means are these the only contracts the company is undertaking but they are some of the most important up to now. With this level of service, they will probably be awarded many more Subsea oriented contracts in Brazil.
The extensive experience DOF Subsea has in Managing Subsea projects, Subsea Engineering, Support, Service & Survey vessel operations and ROV operations in hazardous deepwater locations around the world has been invaluable to the development of the Subsea field complexes being installed in this new ‘pre-salt’ frontier in Brazil.
DOF Subsea has a wide range of state of art equipment availiable to its subsidiaries, including about 30 offshore construction, pipelaying, diving and ROV support vessels, 41 ROV´s, 1 AUV (a Hugin 3000 for deepwater seabed mapping) and 11 diving spreads.
The company has also developed software named C3D and C4D Visualisation System exclusively for the subsea industry. C3D is a unique software system that creates an accurate 3D subsea environment. C4D integrates all the features of C3D, adding real-time capability. C4D enables the operator to monitor the movement of any surface vessel, ROV or subsea equipment.