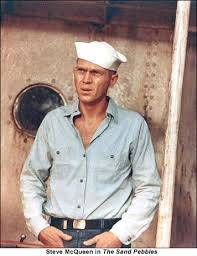 The sailor’s white canvas hat or “Dixie cup” was incorporated into the United States Navy Uniform Regulations in 1886 to replace the traditional straw hat worn during warm summer months, but it was apparently in use for some time prior to its official adoption.  The straw hats were anything but uniform and lacked longevity.  The Dixie cup proved to be easy to clean, easy to stow even in the cramped quarters of ship berthing areas, comfortable to wear, and cheap to manufacture.  They are currently made by Propper International, Inc.,  located in Mayaguez, Puerto Rico.  The brim is made on an automatic brim stitcher with 75 rows of stitching in order to keep it stiff, while the crown is made with traditional sewing.  The two pieces are then sown together.  The entire process takes less than eight minutes.  Approximately 140,000 Dixie cups are produced each month.  They are shipped to the Defense Personnel Support Center for distribution to uniform shops throughout the Navy.  Navy uniform regulations require the Dixie cup to be worn with the lower front edge approximately one-half inch above the eyebrows and not crushed or bent in the middle.  That loose regulation allows for plenty of variations in the style adopted by individual sailors.  Some sailors like their hats squared; while others prefer theirs rolled or fitted with gull wings.  It allows for a measure of individuality.  In 1973, the Navy replaced the Dixie cup with the Chief’s style combination cap in an effort to give the Navy a new look.  The change did not catch on.  The new cap was much more costly ($40.00 vs $4.00 each) and was difficult to stow in lockers aboard ship without getting crushed.  A few years later, the Navy abandoned the experiment and returned to the traditional Dixie cup.  The Navy uniform for enlisted personnel of E-6 and below is instantly recognizable and resembles the image on the Cracker Jack box.  The Dixie cup is the best known head cover in America, and possibly the world.