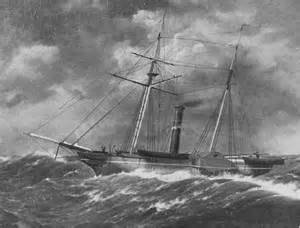 The steam vessel Robert J. Walker was built in 1844 in Pittsburgh, Pennsylvania for the US Revenue Cutter Service.  Proving to be too slow and inefficient for revenue patrols, the side-wheeler was transferred to the US Coast Survey in 1848.  It was named for Secretary of the Treasury Robert J. Walker, who served under President Polk (1845-49).  Originally built as a barque with the steam engine providing auxiliary power, the Walker was later converted to a brig with auxiliary power.  The vessel spent the majority of its time conducting surveys along the coast of the Gulf of Mexico, the first systematic surveys in this area.  In January 1858, its crew assisted in fighting a major fire that broke out at the US Army’s Fort Pickens in Pensacola.  On 21 June 1860, while the Robert J. Walker was sailing to New York with its Gulf Coast Survey records, it was run down by another vessel in heavy weather about twelve miles off Absecon Inlet, New Jersey.  The steamer sank in about 30 minutes, taking with it twenty of the 73 persons on board.  No official inquiry into the casualty was ever conducted, possibly due to the general turmoil surrounding the government and the nation in the period leading up to the outbreak of the Civil War.  The long-forgotten wreck was found by fishermen in the 1970s, but positively identified only in June 2013, following bottom surveys conducted by the National Oceanic and Atmospheric Administration (NOAA) ship Thomas Jefferson and exploration of the wreck by a NOAA dive team.  They were able to confirm the vessel’s identity based on its size, the layout of the iron hull, and various unique characteristics, including its steam engines, its paddle wheel flanges, and its rectangular portholes.  The sinking was the greatest loss of life from a single marine casualty in the history of the Coast Survey and its successor agency, NOAA.