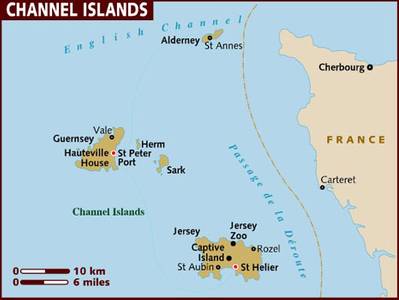 The Channel Islands are an archipelago located in the English Channel, physically much closer to France than to Great Britain.  There are eight populated islands and numerous islets and rocks.  The islands have been inhabited for over 12,000 years and various dolmens (megalithic tombs) and menhirs (large upright standing stones) survive from that early era.  Celtic tribes dominated from about the tenth century BC until the Roman era.  The islands fell under the sway of the Duchy of Normandy in the mid-tenth century and remained so affiliated when the Duchy effectively relocated to England with William the Conqueror in 1066.  Even after Normandy fell to France in 1214, the Channel Islands were retained by the British Crown.  The islands remain British Crown Dependencies, not part of the United Kingdom, and are officially ruled directly by Queen Elizabeth II.  The island of Jersey constitutes the Bailiwick of Jersey, while the other islands constitute the Bailiwick of Guernsey.  Per historic tradition, Elizabeth is referred to locally as “The Queen, our Duke”, rather than as “Her Majesty, The Queen”.  Each Bailiwick is administered by a Bailiff, appointed by the Queen.  The Bailiff is the head of the civil government, the presiding officer of the States (or local legislature), and the head of the judiciary.  Even though the islands are not directly represented in the UK Parliament, that body has authority to legislate for the islands, but only if the particular Act so provides for its application to the islands.   The islands are not part of the European Union, but are part of the Customs Territory of the European Community.  Tourism is the major industry, particularly on the smaller islands, but increasingly finance is playing a major role.  The Channel Islands have become a tax haven.  Within the Red Ensign Group of British merchant marines, Guernsey has operated an open registry for some years.  Recently, Jersey, which traditionally limited its registry to small vessels and yachts, has expanded its footprint to include larger vessels.  The Channel Islands unique status on the periphery of both Britain and the European Union reflect their long history as outliers.