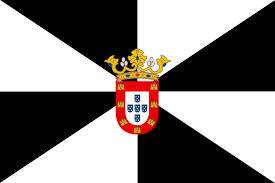 Ceuta is a small (seven square mile) autonomous city and Spanish enclave on the Moroccan peninsula that forms the southern side of the Strait of Gibraltar.  It was ruled successively by the Carthaginians, Romans, Visigoths, and Muslims.  During the reign of King Joao I of Portugal, the city was captured in a bloody battle in 1415, serving as a Portuguese base for exploration of the African coast.  When the Portuguese royal family ended without an obvious heir in 1580, Portugal and Spain united and King Phillip II of Spain also became the King of Portugal.  He encouraged Spanish emigration to Ceuta.  By the time the Iberian Union ended in 1640, the majority of the residents of Ceuta were Spanish and they elected to retain their allegiance to Spain (the only one of the former Portuguese colonies to do so).  The flag of Ceuta, though, reflects that history.  It bears the Portuguese royal shield on the field of the flag of Lisbon.  In 1936, Ceuta was one of the bases from which General Francisco Franco launched his invasion of Spain and came under fire from Republican air and naval forces.  The population of about 80,000 is comprised of 51% Spanish/Christian and 49% Berber/Muslim, with small Jewish and Hindu communities.  The Government of Morocco contends that Ceuta is rightly part of Morocco.  Spain responds that Ceuta was a Christian and European enclave long before Morocco was founded.  It also notes that the population of Ceuta favors retaining its relationship with Spain.  Ceuta relies heavily on fishing, smuggling, and tourism.