Posted to Maritime Musings (byDennis Bryant) on May 27, 2014 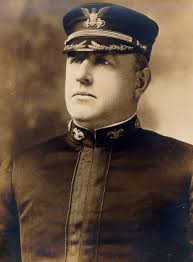 Ellsworth Price Bertholf (1866-1921) entered the Revenue Cutter Service School of Instruction in 1885.  Upon graduation in 1887, he was assigned to the USRC Levi Woodbury.  After tours on several other cutters along the Gulf and Atlantic coasts, he became, in 1895, the first Revenue Cutter Service officer to attend the Naval War College in Newport, Rhode Island.  Soon thereafter, he was assigned as executive officer on the USRC Salmon P. Chase (and executive officer of the USRCS School of Instruction then held onboard).  In November 1897, Bertholf transferred to the cutter Bear, homeported in Seattle.  At almost the same time that he reported aboard, Bear was tasked with providing relief to American whalers trapped in the ice near Point Barrow, Alaska.  The cutter sailed as far north as possible, Nelson Island, on the west coast of Alaska.  There, Lieutenant David Jarvis (executive officer), Dr. Samuel Call (ship’s surgeon), and Bertholf were put ashore with orders to obtain dog sleds and reindeer and to drive the reindeer to Point Barrow to relieve the whalers from starvation.  In what became known as the Overland Relief Expedition, the three men, with assistance from Alaskan Natives, reached the whalers in March 1898 to national acclaim.  In 1902, they each were awarded Congressional Gold Medals.  In the interim, though, Bertholf was attached to the Department of the Interior and tasked with obtaining more reindeer from Russia for transfer to Alaska.  He traveled first to St. Petersburg and then to Moscow, from where he took the Trans-Siberian Railroad to Irkutsk.  Transferring to horse-drawn sledge, he traveled 2,000 miles in the Siberian winter to acquire 428 reindeer.  He then hired a freighter to carry him and the reindeer to Teller, Alaska.  During 1903, he was assigned as an assistant inspector for the United States Life-Saving Service (USLSS), a common practice in that era.  Subsequently, he served as commanding officer of several cutters, including the Bear.  In 1911, when the 23rd senior officer in the Revenue Cutter Service, Bertholf was selected for the position of Captain-Commandant and was confirmed by the Senate on 15 June of that year.  In April 1912, in a casualty that shocked the maritime world, the RMS Titanic struck an iceberg on its maiden voyage and sank with a loss of 1,500 lives.  Soon thereafter, the International Convention on the Safety of Life at Sea (SOLAS Convention) was developed in London at a Conference attended by Captain-Commandant Bertholf.  The United States was assigned primary responsibility for operating the International Ice Patrol, a duty that was soon assigned to the Revenue Cutter Service.  Shortly thereafter, the Cleveland Commission on Economy and Efficiency recommended that the Revenue Cutter Service be dissolved and its assets and responsibilities be assigned to other agencies.  Bertholf and the Secretary of the Treasury mounted an opposing campaign, arguing instead that the Revenue Cutter Service be combined with the Life-Saving Service to create the United States Coast Guard.  They carried the day and the Coast Guard was established on 28 January 1915.  Bertholf was reappointed as Captain-Commandant to head the combined agency.  When the United States declared war on the Axis Powers in 1917, the Coast Guard was automatically transferred to Navy control, but Bertholf ensured that he continued to report to the Secretary of the Treasury for the service’s non-defense missions.  During the war, Bertholf was temporarily promoted to the rank of Commodore.  When the war ended, the Navy attempted to retain the Coast Guard, its personnel, and vessels, but this was successfully resisted by Bertholf.  Captain-Commandant Bertholf retired from active duty in June 1919, having headed the Revenue Cutter Service/U.S. Coast Guard for eight tumultuous years, establishing many precedents for his successors.  He passed away two years later, but has not been forgotten.  The first of the new Legend-class maritime security cutters USCGC Bertholf (WMSL 750) was named in his honor.