Posted to Maritime Musings (byDennis Bryant) on May 16, 2014 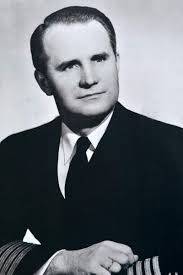 Captain Henrik Kurt Carlsen was master of the general cargo ship SS Flying Enterprise on its final voyage.  The ship was built in 1944 as the SS Cape Kumukaki for the US War Shipping Administration.  Cape Kumukaki, on the Big Island, is the easternmost point of the Hawaiian chain.  After the war, the vessel was sold to Isbrandtsen Company, which renamed it to SS Flying Enterprise, and assigned it to the North Atlantic route.  On 21 December 1951, it departed Hamburg, Germany for New York.  In addition to its regular crew of 48, it carried ten passengers.  The Flying Enterprise was loaded with pig iron, coffee, rags, peat moss, twelve Volkswagen cars, antiques, typewriters, and naphthalene.  On 25 December, it encountered a severe storm in the Western Approaches to the English Channel, where it suffered structural damage.  The cargo shifted.  When the ship’s list reached 45 degrees on 28 December, a distress call was transmitted.  Several vessels responded and the passengers and all of the crew other than Captain Carlsen were evacuated.  One male passenger drowned during the evacuation.  Captain Carlsen refused to leave the ship while there was any hope of getting it to a safe port.  His saga became headline news around the world.  On 3 January 1951, the salvage tug Turmoil arrived, but was unable to get a line on Flying Enterprise.  The tug’s mate, Kenneth Dancy, transferred to Flying Enterprise on 4 January, by which time the list had increased to 60 degrees.  The ship was finally taken in tow on 5 January, but the line parted on 10 January, when the ship was 41 nautical miles from Falmouth.  Captain Carlsen and Kenneth Dancy abandoned ship at 1522 and Flying Enterprise sank at 1610.  By that time, Captain Carlsen had involuntarily achieved worldwide renown.  He was awarded the Lloyd’s Silver Medal for Meritorious Service and received a ticker-tape parade in New York City on 17 January 1952.  Kenneth Dancy was awarded a medal for Industrial Heroism and a citation from the American Institute of Marine Underwriters.  After he passed, Captain Carlsen’s remains were buried at sea over the wreck of the Flying Enterprise.  He continues to exemplify the highest standards of devotion to maritime duty.