A small but important pelagic fish 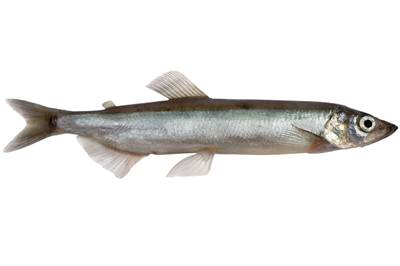 The capelin (mallotus villosus) is a member of the smelt family and is widespread throughout cold marine waters of the Northern Hemisphere.  Adults are six to eight inches in length, with the females being slightly larger on average than the males.  The body is slender and of fairly uniform depth.  The head is pointed, with the mouth gaping back to below the center of the eye.  The lower jaw extends beyond the upper jaw.  Teeth are small, as are the numerous scales.  The capelin is olive on its dorsal surface and white on its ventral surface.  It is pelagic in habit and feeds primarily on plankton and krill.  In turn, it is a food source for whales, seals, cod, squid, and seabirds.  Capelin tend to spawn in the spring.  The mature adults move into coastal waters, where the females lay eggs at night on sandy beaches or on rocky coastal bottoms.  Males fertilize the eggs.  Soon thereafter, most males die (similar to the behavior of many salmon).  Capelin are targeted for fish meal and oil industry products.  There is a sizable market for human consumption, particularly in Russia, Iceland, and Maritime Canada.  In Maritime Canada, it is a regular practice for locals to scoop capelin in nets during their annual spawning.  Capelin roe is also considered by some as a delicacy.  Population can vary greatly from year to year, depending on a variety of factors.  The major fishery of capelin is in the Barents Sea and is managed jointly by Norway and Russia.  This fishery was closed from 2003 through 2008 due to low numbers of spawning stock.  In 2013, the quota was set to 200,000 tons, decreasing to 120,000 tons in 2015.  The capelin fishery for the Barents Sea for 2016 has again been closed.