A cousin of the starfish, generally with longer and thinner arms 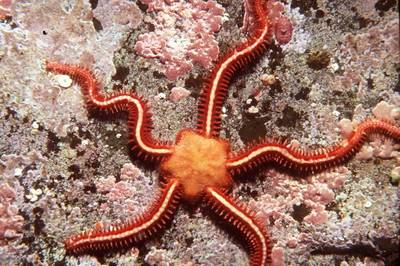 The brittle star (Ophiurida) is an echinoderm and closely related to the starfish, which it superficially resembles.  It has five slender flexible arms, which can reach up to two feet in length.  The arms are used primarily for locomotion and, unlike starfish, are minimally involved in feeding.  Different species reside in different waters from the tropics to the polar regions and at different depths.  Brittle fish can be found from shallow water to depths of up to 6,000 feet.  Primarily nocturnal feeders, they tend to burrow into the sand and mud during the day.  The central body disk of the brittle star is sharply distinct from the arms.  In the disk are found all of the viscera, including the organs of reproduction, digestion, and respiration.  The underside of the disk contains the mouth, with five toothed jaws.  The opening of valve for the water vascular system (scientifically known as the madreporite) is located on one of the jaw plates.  The water vascular system is used to actuate movement of the arms and its tubes run the length of each arm, radiating out from the central valve.  The nervous system consists of a nerve ring around the central disk and radial nerves extending out to the end of each arm.  Most brittle stars have no eyes, but nerve endings in the outer layers sense chemicals, touch, and the presence or absence of light.  The mouth serves as both the point for ingestion of food and as the point for elimination of waste.  The mouth leads almost directly into a stomach cavity, constituting the largest portion of the central disk.  Brittle stars are bottom feeders, consuming small organic material found on the sea floor.  Respiration occurs through cilia-line sacs located between the arm bases on the central disk.  Oxygen is transported via a series of sinuses and vessels throughout the body, where it is exchanged with carbon dioxide for return to and elimination through the sacs.  Brittle stars can move quickly when disturbed, with one arm tending to lead the way and the other four arms providing the locomotion.  They easily regenerate arms lost to predators.  Brittle stars are not targeted by humans, but habitat loss can present problems.