A Nicaraguan coastal community with pirate and English heritage. 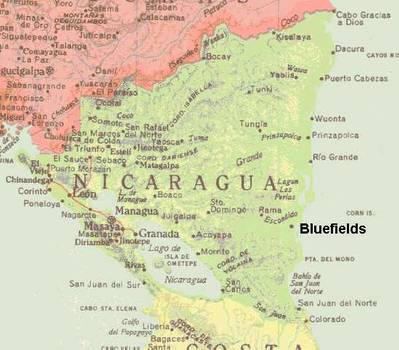 Bluefields is the capital of the Region Autonoma del Atlantico Sur on the Caribbean coast of Nicaragua.  The area has been home for many years to the Miskito Indians.  Not long after the arrival of European explorers, pirates and privateers found that they could hide there from Spanish authorities while repairing and refitting their ships.  In 1602, the Dutch privateer Abraham Blauvelt established his headquarters at this location.  His name loosely translates into English as “Bluefield” and the name has been attached to the region ever since.  Blauvelt was associated with the Dutch West India Company and frequently sold his cargo and prizes in the Dutch colony of New Amsterdam.  English pirates largely supplanted the Dutch in the Bluefields area in about 1630.  Soon thereafter, the English Providence Company began a settlement in the region.  African slaves were brought in to work the land.  In 1740, England established a formal protectorate there in an attempt to break the Spanish monopoly on Central America.  The Bluefields colony was closely tied to and heavily dependent upon English forces in Jamaica.  After the British banned slavery in 1834, Bluefields became a destination for blacks from throughout the Caribbean.  The British formally abandoned Bluefields in 1850, but its influence on everything from culture to architecture has remained.  US Marines were stationed in Bluefields during the United States interventions in Nicaragua in 1912-15 and 1926-33.  During the US confrontation with the Sandinista regime in 1984, the US Navy mined the Bluefields harbor.  Today, the Nicaraguan coast is a favorite route for smuggling cocaine from Columbia to points north.  The area off Bluefields is regularly patrolled by US Coast Guard cutters.  When spotted, smugglers frequently dump their loads into the sea.  Cocaine bales coming ashore in the vicinity of Bluefields are referred to as white lobsters.