Battle of the Shimonoseki Straits 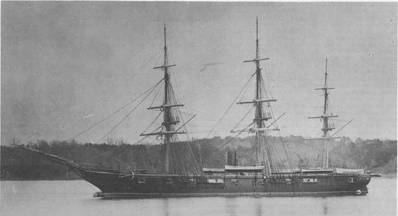 The Shimonoseki Straits constitute a narrow waterway between the main Japanese island of Honshu and its southern neighbor Kyushu.  It was and is a vital route for vessels trading among the Japanese islands.  Japanese ports were partially opened to western trading vessels following the visit of Commodore Matthew Perry and the Black Ships of the United States Navy in 1854, but tension soon increased among the Japanese warlords.  In March 1863, Emperor Komei issued an order calling for the expulsion of all barbarians.  The Choshu clan, under Lord Mori, controlled the Shimonoseki Straits.  The clan possessed various antiquated cannons and some modern guns.  The clan also had three small warships that had been presented to Japan by the United States after Commodore Perry’s visit, along with several warships provided by European governments.  On 25 June 1863, the US merchant vessel Pembroke was fired on by two of the Choshu warships.  Pembroke managed to escape with only minor damage.  The next day, the French naval dispatch steamer Kienchang was also attacked just outside the Straits, this time by land-based artillery.  It escaped with one wounded sailor.  On 11 July, the Dutch warship Medusa, transiting the Straits, was fired on.  It escaped, but suffered nine casualties.  On 16 July, though, with the blessing of the US Consul General in Yokohama, the warship USS Wyoming, Captain David McDougal commanding, entered the Shimonoseki Straits with its personnel at general quarters.  Forces of the Choshu clan opened fire from its ships and shore batteries.  Wyoming immediately returned fire, while steaming between the Choshu warships.  Two of the Choshu warships were sunk and one other severely damaged.  Wyoming suffered moderate damage.  Four of its sailors were killed and another seven were wounded.  Wyoming was the first foreign warship to take the offensive to uphold treaty rights in Japan.  Intermittent shelling of foreign merchant vessels continued though.  The shellings were halted after a joint naval expedition of Great Britain, France, the Netherlands, and the United States attacked and defeated the Choshu clan in September 1864.  The Japanese Government disavowed the actions of the Choshu clan and peaceful trade was restored.