The pivotal naval battle the saved western civilization for a millennium 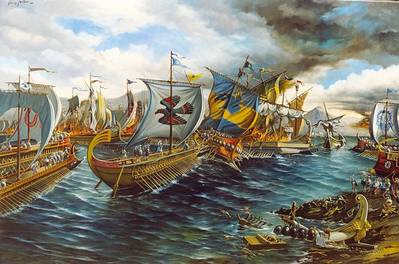 The Battle of Salamis was fought in September 480 BC between the warships of the Greek alliance and the warships of Persian Empire.  Following the land battle of Thermopylae and the sea battle of Artemisium, the victorious Persians moved down Attica and conquered the city-state of Athens, which had been largely evacuated.  The Persian King Xerxes was anxious to decisively defeat the Greeks, who had defeated his father Darius at the battle of Marathon in 490 BC.  He therefore pressed ahead with his plan to overwhelm the much smaller Greek fleet, then located in waters between the mainland and the island of Salamis.  Numbers of the opposing forces are somewhat in dispute, but the Persian fleet consisted of approximately 1,000 to 1,200 triremes, while the Greeks had approximately 370.  Upon hearing of possible dissention in the Greek ranks, Xerxes ordered his fleet into the confined waters.  The Greeks, though, were unified in their opposition to the Persian invaders and were more experienced ship-handlers.  The Persian vessels got in each other’s way, making a coordinated attack impossible.  The Persians were decisively defeated, losing about 80% of their vessels and crews.  Xerxes soon withdrew the bulk of his forces back to Asia Minor, leaving a relatively small occupation army.  These remaining soldiers were defeated the next year in the battle of Plataea.  The Persians never again attempted to invade Greece.  If the Persians had prevailed, western civilization would look much different.  Europe was not successfully invaded again by Asian forces until it was attacked by the armies of Genghis Khan in about 1220 AD.  The major lesson of the Battle of Salamis is that one should never underestimate your opponent, particularly when that opponent is defending the homeland.