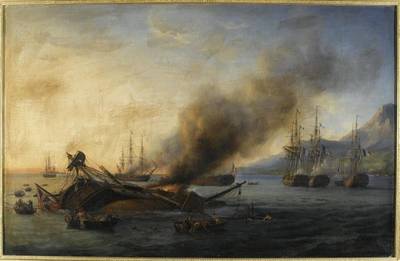 The Battle of Grand Port (20-27 August 1810) took place at Grand Port on the southeast coast of Mauritius (then referred to as Isle de France) between four Royal Navy frigates and, on the French side, various shore defenses, two frigates, a corvette, and two recently captured East Indiamen.  The battle was closely fought, some of it hand-to-hand, with significant losses and casualties on both sides.  At the end, though, it was a French victory – the sole French naval victory over the Royal Navy during the Napoleonic Wars.  It is also the only naval battle commemorated on the Arc de Triomphe in Paris.  During the Napoleonic Wars, French frigates were employed in the Indian Ocean as commerce raiders, primarily attacking East Indiamen carrying goods to the British Isles.  The Royal Navy, principally concerned with countering the French and Spanish naval threat in the Atlantic, could only spare a handful of older frigates to address the Indian Ocean problem.  Commodore Josias Rowley was placed in command.  In March 1810, Rowley commanded the joint army and navy forces that captured the French island of Reunion, which was one of the two main French strongholds in the region – Mauritius being the other.  Rowley then sent Captain Samuel Pym, commanding HMS Sirius, with three other frigates to attack the French forces off Mauritius.  Initial plans called for capture of the French fort on İle de la Passe, which protected Grand Port, the best anchorage on the coast of Mauritius.  The night attack of 10 August by marines in boats failed due to high winds.  The second attack, on the night of 13 August, succeeded but with heavy losses.  A dispute arose between Captain Pym and Captain Nesbit Willoughby, commanding HMS Nereide, the second most-senior officer, over use of resources.  The French ships arrived on 20 August, unaware of the British actions.  As the French squadron entered the channel into Grand Port with an experienced pilot on board, the British forces on İle de la Passe opened fire.  The squadron made it into the anchorage, but found it impossible to get out, even after the fort on İle de la Passe was largely destroyed when its magazine caught fire.  The French squadron was now trapped in the anchorage, with the Royal Navy squadron patrolling just offshore.  Misjudging the condition of the French forces, Captain Pym ordered an assault.  Captain Willoughby refused to transfer his experienced pilot to the Sirius, which promptly ran aground, refloated, and grounded again.  HMS Magicienne grounded soon after.  The French fire, both from ashore and from the trapped squadron, was more effective than that of the Royal Navy.  A small French relief squadron arrived late on 27 August.  By that time, the active fighting was over.  The Royal Navy survivors surrendered under conditions of parole.  By December, though, Royal Navy reinforcements arrived.  The French Navy commander in the Indian Ocean and his flagship were captured.  In addition, the French island of Ile de France was captured and renamed Mauritius.  The French military threat in the Indian Ocean had come to a close.  Mauritius remained a British possession until its independence in 1968.