The most successful pirate in terms of ships captured 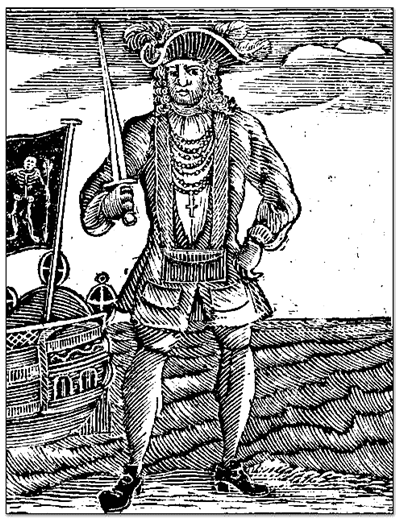 Bartholomew Roberts (1682-1722) is credited with the capture of over 450 ships, making him the most successful pirate in terms of ships captured.  Born in Pembrokeshire, Wales (birthname John Roberts), he were to sea at an early age.  By 1718, he was mate on a sloop in the Caribbean and had mastered the art of navigation, which would stand him in good stead throughout his life.  By the next year, he was a mate on a slave ship engaged in the infamous triangular trade.  Not long thereafter, his slave ship was captured by pirates.  At first, he abhorred the concept, but soon warmed to the freedom and the large potential rewards.  The pirate captain was also a Welshman and took to confiding in Roberts in Welsh, which the other sailors could not understand.  Assuming the appearance of a British warship, the pirate ship sailed into the harbor of Principe, a Portuguese colony, intending to capture the governor and hold him ransom.  The Portuguese saw through the ruse and killed the pirate captain when he came ashore.  The crew promptly elected Roberts as the new captain.  They sailed back to Principe, landing surreptitiously at night, killed the governor and most of the male population, and stole almost all items of value.  From there, Roberts sailed to Brazil where he captured a ship holding rich treasure consigned for the King of Portugal, including a cross set with diamonds.  Moving to the Caribbean, he was met in rapid succession by warships from Barbados and from Martinique.  He was able to escape but not without loss of some of his crew and damage to his ship.  He swore vengeance upon both islands.  Seeking less defended locations, Roberts moved on to the coast of Canada, capturing a number of fishing vessels and coastal traders.  His reputation preceded him as he sailed his ship into the port on Trepassey, Newfoundland on 21 June 1720 with his pirate flags flying and his musicians playing.  The crews of all 22 ships in the harbor immediately fled ashore.  Over the next week, as his crew looted what valuables they could find, Roberts regularly berated the masters of the captured ships for cowardice.  He soon captured more ships, taking one as his new flagship and fitting it with 26 cannons.  Roberts then returned to Caribbean and continued capturing and looting vessels.  Off Martinique, he assumed the appearance of a French merchant vessel and approached a French warship on which the governor was a passenger.  He suddenly opened up with cannon fire and his men boarded successfully.  The governor was captured and promptly hung from the yardarm in revenge for the prior attack on Roberts.  He soon moved on to new hunting grounds in West Africa.  When he was pursued by two small French warships, he captured both and converted them to piracy.  Off present-day Liberia, he captured a British frigate transporting soldiers to the Cape Coast Castle.  A number of the soldiers volunteered to serve as pirates.  In January 1722, the pirates sailed into Ouidah harbor, Dahomey (now Benin), again with flags flying and musicians playing.  They captured all eleven ships in port.  The crew soon became very drunk, but Roberts maintained his usual soberness.  A British warship suddenly appeared offshore.  Roberts planned to sail quickly past it, accepting one broadside, but confident that his vessels would survive and be able to outrun the warship.  His crew, though, was still quite inebriated.  They proved unable to properly handle his vessel.  The warship got off two broadsides, killing Roberts.  As previously instructed, his crew threw his body overboard.  Most of the pirates were captured, tried, and hung.