An Australian research and resupply icebreaker 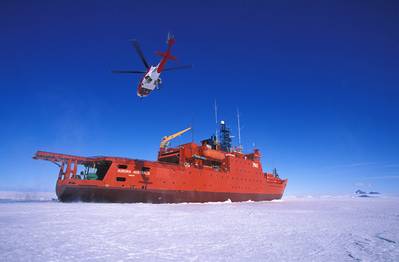 The Aurora Australis was built in Newcastle, New South Wales in 1989 and entered service in 1990.  It is owned and operated by P&O Maritime Services and is regularly chartered by the Australian Antarctic Division (AAD), the Australian government agency in charge of polar programs.  The ship is 95 meters in length, with a displacement of 8,158 tons.  It has a single controllable pitch propeller for propulsion, but also has three thrusters for close maneuvering.  It is capable of breaking level ice of up to 1.23 meters in thickness at 2.5 knots.  There are 24 regular crew members, but it also can carry up to 116 passengers.  The Aurora Australis has a cargo capacity of 1,700 cubic meters for breakbulk or up to 29 TEU containers, as well as 1,000 cubic meters of fuel oil.  It also carries a fully-equipped suite of laboratories for biological, meteorological, and oceanographic research.  It is equipped with a helipad and hangar for up to three helicopters.  From its homeport in Hobart, Tasmania, the Aurora Australis spends most southern summers doing research in Antarctic waters and supporting the five bases that AAD operates in Antarctica: Commonwealth Bay; Casey; Davis; Mawson; and Dome A.  The AAD also operates a small research facility on Macquarie Island and has an unmanned facility on Heard Island, both in the sub-Antarctic region.  The Aurora Australis is occasionally chartered for other work during the southern winter.  For example, in May and June 2011, it was chartered by the Department of Defence as an amphibious transport ship to support responses to humanitarian crises and natural disasters.