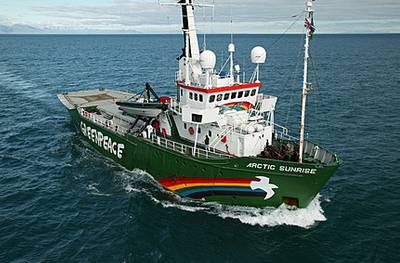 The Greenpeace vessel Arctic Sunrise was launched in 1975 as the Norwegian sealing vessel Polarbjørn (Polar Bear).  With dimensions of 162 feet (length), 37 feet (beam), 17 feet (draft), and 497 GT (gross tonnage), it has a maximum speed of 13 knots.  After twenty years as a sealer, the ice-strengthened vessel was acquired in 1995 by the environmental advocacy group Greenpeace.  While Greenpeace refers to the Arctic Sunrise as a research icebreaker, it is registered with the Government of the Netherlands as a sea-going motor yacht, thus avoiding certain technicalities.  It has berthing space for up to 28 persons.  The ship has been used in a number of high-visibility environmental and ecological protests, some endangering navigation.  In January 2006, it and the Japanese whaling vessel Nisshin Maru collided in Antarctic waters, with both suffering minor damage.  In February 2007, it took part in a blockade of the Royal Navy base near Edinburgh.  In August 2007, activists from the ship boarded the bulk carrier Algomarine in the Great Lakes preventing it from delivering coal to a power plant until the Canadian Coast Guard removed them.  On the same voyage, it blockaded a freighter from getting underway on the Saguenay River with a cargo of wood pulp derived from logging in Canada’s boreal forests.  Despite the lack of government approval, Arctic Sunrise most recently entered Russian waters of the Barents Sea and protesters attempted to board the oil and gas platform Prirazlomnaya.  A Russian Border Guard vessel fired a warning shot over the bow of the Arctic Sunrise after it refused to heave to.  The Greenpeace vessel and its personnel are now under detention and federal criminal charges of piracy have been initiated.