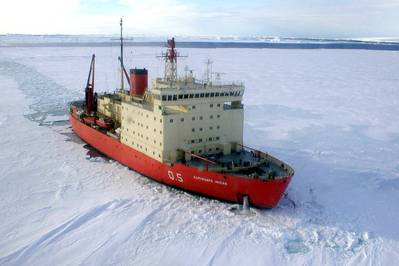 The icebreaker ARA Almirante Irizar (Q-5) is one of the largest vessels in the Argentine Navy.  It was built in Finland, launched in February 1978, formally commissioned in December of that year, and arrived in Buenos Aires on 23 March 1979, where it replaced the older icebreaker ARA General San Martin.  It is named after Admiral Julián Irizar (1869-1935).  As a senior officer, he guided the modernization of the Navy.  As a junior officer, he is remembered as the captain of the corvette Uruguay that in 1903 rescued the Swedish Antarctic Expedition after its ship was crushed in the ice off the Antarctic Peninsula.  Now, Argentina maintains six permanent Antarctic stations and seven seasonal stations.   ARA Almirante Irizar is the principal ship for the resupply and maintenance of these facilities.  In addition, it occasionally conducts passenger voyages to Patagonia and the Antarctic, similar to Arctic voyages of Russian icebreakers.  In 2002, it relieved the supply vessel Magdalena Oldendorff, which was trapped in the Antarctic ice.  In 2007, the icebreaker suffered a serious fire while returning from its Antarctic mission.  It has just completed a lengthy repair, overhaul, and upgrade.  Laboratory space has been increased from 800 square feet to 4,470 square feet.  The main engines have been replaced.  The ship now has DNV Class Notation 1A1, Specially Ice Strengthened, Naval Support, HELDK SHF, E0, DG-P, LFL, and complies with applicable IMO requirements for operation in polar waters.  It carries both general and refrigerated cargo, liquid cargo, passengers, and scientific personnel.  It is equipped with research facilities and a hospital.  It carries two helicopters during its Antarctic missions.