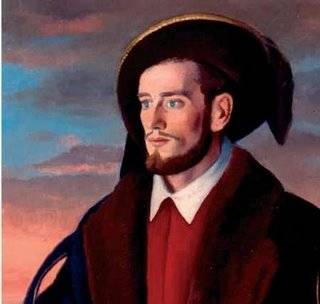 Andres de Urdaneta (1498-1568) sailed in the Loaisa Expedition that departed Spain in 1525 to reach the Spice Islands via the Pacific Ocean, thus avoiding the Portuguese monopoly on the Indian Ocean route.  The expedition, initially comprised of seven ships, was a disaster.  Only one ship, crewed by Urdaneta and 24 other men, reached the Spice Islands, only to be taken captive by the Portuguese.  Urdaneta and a few other survivors finally reached Portugal in 1536, taking eleven years to complete a circumnavigation.  Urdaneta soon escaped to Spain.  From there, he travelled to New Spain (modern-day Mexico) and became a member of the Order of Hermits of St. Augustine (the term hermit apparently had a loose meaning at the time).  In 1564, when the expedition commanded by Miguel Lopez de Legazpi, departed the west coast of New Spain to establish a Spanish colony in the East Indies, Urdaneta served as the navigator.  The expedition established settlements in the Philippines (so named in honor of King Philip II of Spain).  Legazpi, who established the capital of the Spanish settlement in Manila, needed assistance from New Spain, but realized that the prevailing winds and currents prevented a return voyage along the same route used to cross the Pacific from east to west.  He therefore directed Urdaneta to seek out a more efficient route.  Urdaneta was aware of the circular gyre in the North Atlantic discovered by Christopher Columbus that allowed ships sailing west to do so in lower latitudes and to travel east in higher latitudes.  He suspected that the same conditions prevailed in the Pacific.  Since no one had done so previously, though, he was betting the lives of himself and his crew in undertaking this mission.  Fortunately, he was correct and reached the port of Acapulco after 130 days.  Fourteen crewmembers died en route.  Urdaneta never returned to Manila, but the voyage that he pioneered allowed for establishment of a regular trade route between Manila and Acapulco.  Spanish galleons continued to sail the route until 1815, when Mexico became independent.  Urdaneta died in Mexico City on June 3, 1568.