Anchorage is in a quandary over its new port

Military and federal contractors and agencies are the real power 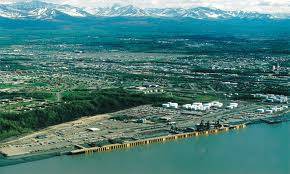 Alaska has always sailed an uneasy course between federal and private sector involvement in projects. The state and the port are on the fault line between a strategic asset and a small economy, albeit with huge potential in oil that has proved fertile ground for politicians.

The result has been that when the Port of Anchorage needs to get a project going, some federal direction and money is often needed. So it is with the current expansion project, where the city is in a dither over how big the port facilities should become. The goal was to build a berthing area of 7,971 feet, increasing the number of berths from four to seven, while adding 135 acres.

The wharf design was based on open cell sheet piles.

MARAD is lead agency but the State Assembly wants matters to change and give the city more authority. It's not hard to see why. Costs have gone up about 200 percent to more than $1 billion and steel sections for the foundations and pilings have been damaged.

Says the port: "In January of 2011, the Port initiated a new Project Management and Oversight Organization. The first tier of this organization is comprised of Mayor Dan Sullivan, Municipality of Anchorage, and MARAD Administrator David Matsuda. Ultimately their role is to provide strategic oversight of the project and make policy determinations as needed."

MARAD is now about to undertake an audit.

But, Anchorage for its part has taken a business approach to the project that shows just how dependant it is to the world of federal projects and contractors. The main contractor is something called Integrated Concepts & Research Corp., whose portfolio of clients includes mostly military and federal-related agencies, along with NASA. Its parent is another heavily federal-related corporation, VSE Corp, whose clients are almost all military agencies. "VSE is proud to be one of the Top 100 defense contractors in the world," states the corporation.

A sub-contractor in Anchorage is a private, local company called West Construction Company, which also has a contract in a place where the US military is heavily involved, Umm Qasr in Iraq.

Some Alaskan maritime insiders are uneasy about companies with experience in mostly DOD work, where concern for profit and loss and efficiency are of secondary importance, becoming the main attraction in civilian undertakings.

So far, $265 million has been spent on the port project – almost all from Congressional earmarks. That too shows just how dependant the port is on federal purse strings.

The inescapable conclusion is that Anchorage is squeezed by the bear hug of federal and military contractors and advisors. That will continue for a good number of years.