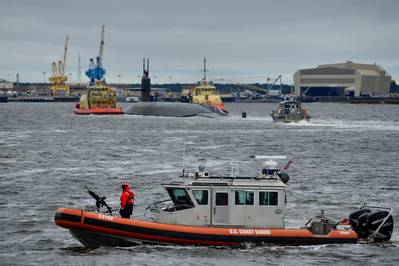 The U.S.-Flag dredging industry commemorates the 78th anniversary of the Japanese air raid on the United States Naval Base at Pearl Harbor highlighting the critical need for a robust American shipbuilding capacity to ensure for the preparedness of the nation’s navy bases.
“On this day, December 7, 2019, we remember our brothers and sisters of the U.S Merchant Marine look to the past sacrifices made by 2,403 U.S. servicemen who died in the attacks on Pearl Harbor.  We honor the members of the U.S. Armed Services,” said William P. Doyle, CEO of the Dredging Contractors of America.
Currently, dredging preparation and operations are underway at Kings Bay Naval Base, home to the Ohio Class Trident nuclear powered submarines and in Norfolk, Virginia, home of the world’s largest naval base. Dredging Contractors of America Jones Act companies Great Lakes Dredge & Dock and Weeks Marine have been awarded these vital national security contracts.
Great Lakes Dredge & Dock (GLDD) is preparing to commence dredging at the Kings Bay Entrance Channel and sections of the inner channel.  GLDD plans to begin equipment mobilization during the second week of December, which will include staging of piping on the beaches with dredging operations scheduled commence in early January 2020.
“This project is vital for ensuring mission critical navigation for Naval Submarine Base Kings Bay, the East coast home to the Ohio Class submarines,” said U.S. Army Corps of Engineers Project Manager Beau Corbett in a statement released this week.
Naval Submarine Base (NSB) Kings Bay is home to the Atlantic Fleet’s Trident II Submarines. Kings Bay borders the town of St. Marys, Georgia in the southeast Georgia, just north of the Florida border.  NSB Kings Bay has three major commands: Trident Training Facility (TTF), Trident Refit Facility (TRF), and Strategic Weapons Facility, Atlantic (SWFLANT). In addition, the installation is the homeport of five Ohio-Class TRIDENT submarines and two guided missile submarines, the USS Florida and the USS Georgia.
The dredging project will include the beneficial placement of an estimated 300,000 cubic yards of beach compatible sand on northern portions of Fernandina Beach. The Corps estimates the contractor will also disperse some 900,000 cubic yards of non-beach compatible sand in both an approved near-shore disposal area and an offshore disposal site. The planned beach fill area will extend from the Fort Clinch Area Boundary (1700 North Fletcher) to Main Beach. The Dolphin Avenue parking lot will serve as a staging area, with safety fencing provided as required, throughout the period of operations.
In addition, Weeks Marine commenced dredging operations for the Port of Norfolk, Virginia in early November.  In October, the Port of Virginia executed a contract with New Jersey-based Weeks Marine to begin the deepening of the western side of Thimble Shoal Channel.  The work includes dredging the shipping channels to 55 feet — with deeper ocean approaches — and widening them up to 1,400 feet in specific areas.
The dredging project will enhance accessibility to the Port of Virginia while providing significant benefits to the national economy and national security.  The deepening effort got under way in 2015, when the U.S. Army Corps of Engineers and the port agreed to share the cost of evaluating the benefits of dredging the Norfolk Harbor to a depth beyond 50 feet.
“When the flow of cargo is efficient, it is the consumer and the economy that benefit,” said, John Reinhart, chief executive officer and executive director of the Virginia Port Authority. “Additionally, movement of vessels to and from Naval Station Norfolk becomes more efficient because the wider channels allow for safe, two-way passage of military and commercial vessels.”
Naval Station (NS) Norfolk, the world’s biggest naval base, is situated in south-eastern Virginia in the Sewells Point peninsula of Norfolk city. The Naval Station Norfolk ensures operational readiness of the US Atlantic Fleet by providing facilities and installation services for the biggest concentration of the US Navy, including 75 ships and 134 aircraft.
According to the Virginia Ports Authority, collaboration with the U.S. Army Corps of Engineers, utilization of  a streamlined permitting process and the support of the elected officials on the state and federal levels were all factors in securing final, early approval.  Commenting
“Today, the work to make the Port of Virginia the deepest port on the U.S. East Coast gets under way,” said Mr. Reinhart.   “This project holds long-term benefits for Virginia, for the port, for cargo owners, our customers and the ocean carriers.”
“Safe, two-way movement of ultra-large container vessels, unrestricted by tide, is a significant competitive advantage for our port,” he continued. “This project and all other improvements we are making at the terminals tells the ocean carriers ‘we are ready for your big ships.”
U.S. dredging companies are an integral part of the U.S. domestic maritime industry, the pillar of our nation’s economic, national, and homeland security. More than 40,000 American vessels built in American shipyards, crewed by American mariners, and owned by American companies, operate in our waters 24/7, and this commerce sustains nearly 650,000 American jobs, and generates $41 billion in labor compensation, $7 billion in taxes, and more than $150 billion in annual economic output.
“National security operations like dredging cannot not be outsourced,” said William P. Doyle, chief executive officer of the Dredging Contractors of America.  “The military relies on the U.S. Jones Act dredging fleet to maintain the waterways to our U.S. Navy Bases.  There is no substitute for the American owned, operated, crewed and built U.S.-flag dredging fleet,” he concluded.