Posted to Maritime Musings (byDennis Bryant) on May 25, 2010 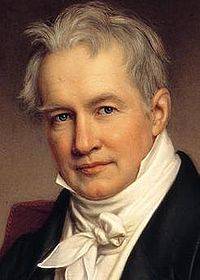 Alexander von Humboldt was one of the most famous scientists and explorers of the nineteenth century.  Today, he is best known for the Humboldt Current off the west coast of South America (which he was the first to fully appreciate and document) and Humboldt Bay in northern California (which was named for him, although he never was there).  His best-remembered achievement was his five-year exploration of Latin America in 1799-1804.  He traveled over 1,700 miles up the Orinoco River and was the first to report its connection with the Amazon River basin (via the Casiquiare canal).  He was also one of the first Europeans to study and document the electric eel.  He studied the fertilizing properties of the massive guano deposits on islands off the coast of Peru.  His writings on this topic resulted in the development of a significant trade in guano to Europe and the United States.  On his way back to Germany after his travels through Latin America, Humboldt stopped in Washington, DC, staying at the White House for six weeks as a guest of President Thomas Jefferson.  The Humboldt Current, responsible for the guano deposits on the Peruvian islands, is a cold, low-salinity ocean current flowing from the Antarctic to the tropics along the west coast of South America.  Its upwelling of nutrients supports one of the most productive ecosystems in the world.  Near the top of this unique food chain are prodigious numbers of sardines, anchovies, and jack mackerel.  Also living off this abundance are millions of seabirds.  After gorging themselves on the readily available sea life, the birds nest and excrete all over the islands, leaving behind tons of material that dries and becomes guano, which has high levels of phosphorus and nitrogen.  With development of artificial fertilizer at the end of the nineteen century, the value of guano plummeted, largely leaving the birds in peace.

Fundraising Drive to Support Families of Guardians in Helicopter Tragedy