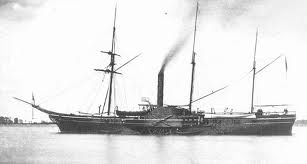 As a consequence of the Upper Canada Rebellion of 1837-38, the Royal Navy employed two armed steamers on Lake Erie.  These were the first armed vessels on the Great Lakes since the end of the War of 1812.  In response, the United States Navy determined to employ its own warship on the Great Lakes.  Given that the military threat was minimal, it was decided to utilize the opportunity to be innovative.  The warship was to be constructed of iron and, since there was no capacity for construction of such a vessel at a Great Lakes port, it was decided to have the hull built in sections in Pittsburgh and transported overland to Erie, Pennsylvania for assembly.  When assembly was completed in December 1843, the ship was sent down the ways.  It hung up, though, before reaching the water.  Despite several hours of effort, the ship would not move.  Everyone went home for the night, determined to try again the next day.  When the shipyard workers arrived the next morning, the ship was found floating a few yards offshore, having launched itself without apparent human intervention.  The ship was duly commissioned as the USS Michigan.  There not being much armed combat on the Great Lakes, the ship was employed frequently in law enforcement, primarily against so-called timber pirates, who were illegally harvesting logs from federal land.  In 1851, it was also used during the arrest of James Jesse Strang, who called himself King James I and headed a dissent Mormon colony on Beaver Island at the north end of Lake Michigan.  During the Civil War, the warship was employed in providing maritime security for the prisoner-of-war camp on Johnson Island on Lake Erie near Sandusky and in showing a military presence in Great Lakes ports.  On September 19, 1864, a group of Confederate commandos boarded the passenger steamer Philo Parsons in the port of Maiden, Upper Canada (south of present-day Windsor, Ontario, on the north shore of Lake Erie).  Once the steamer was underway, they seized control.  The plan was to attack the USS Michigan off Johnson Island and free as many Confederate POWs as possible.  Their accomplice, who was supposed to infiltrate the Michigan in preparation of the attack, had been discovered and arrested.  The commandos on the Philo Parsons sailed back to Canada and abandoned their scheme.  Thus, the USS Michigan never saw combat or hostilities.  It continued to serve, mostly in a training capacity, until 1905, when its name was changed to the USS Wolverine and it was transferred to the Pennsylvania Naval Militia.  It served with the Naval Militia until it was decommissioned in 1923.  After some years on a sandbank at Presque Isle, the hull was sold for scrap.  The prow, though, was saved and may now be found in the Erie Maritime Museum. 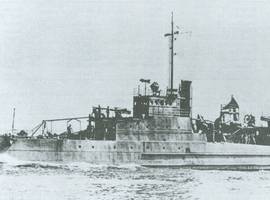