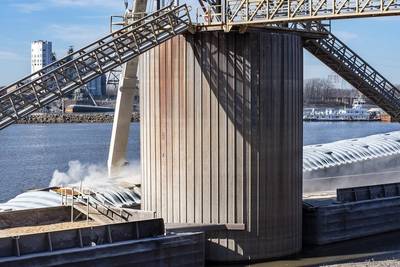 Record U.S. corn sales, especially those to China, mean that exporters will be extremely busy for at least the next six months. But they no longer need to set new records, as the recent corn shipping pace has sufficiently boosted the efforts.

Updated figures from the U.S. Department of Agriculture on Monday placed corn export inspections, a proxy for actual exports, at 2.05 million tonnes for the week ended February 25. That is the second-largest volume for any week behind the one ended Nov. 30, 1989, with 2.3 million tonnes.

Market participants have been anxiously watching the pace of U.S. corn exports ever since the 2020-21 season started on Sept. 1, as sales had already reached record highs. But the shipping pace was lackluster in the first few months, leading some analysts to doubt whether this year’s exports could reach the lofty expectations.

Weekly export data suggests soybean shipments did not notch a new high last month. But about 87% of USDA’s full-year export forecast of 2.25 billion bushels (61.2 million tonnes) had been fulfilled in the first six months of 2020-21. That is well above the recent average of around 70%.

Soybean export sales as of February 25 covered 98% of the target and 2020-21 ending stocks are seen hitting seven-year lows, meaning there are very few U.S. beans left to sell on the export market. This should allow corn shipments plenty of room to dominate in the next six months, a large portion of which will be bound for China.

In the second half of 2020-21, soybean exports must total fewer than 8 million tonnes, and that is less than half of the five-year mean for the period. That means on average, almost 300,000 tonnes – or about five cargoes – must be shipped per week until the end of August.

No records needed
In the first half of 2020-21, U.S. corn exporters shipped about 42% of USDA’s current full-year export target of 2.6 billion bushels (66 million tonnes). That is in line with the five-year average. Export sales are not a hindrance, as 90% of USDA’s projection had been sold by February 25, much more than usual.

Corn shipments in 2020-21 have been below average in just one month so far, September. But exports have gained speed ever since, and by an increasing margin over the typical levels. According to data published by the U.S. Census Bureau on Friday, January corn exports of 5.8 million tonnes were the second-largest ever for the month, behind 1990 and nearly 60% above normal.

February exports may have topped 6 million tonnes for the first time ever, anchored by the massive week at the end of the month. The current record for the month is 5.4 million tonnes in 2008.

About 38 million tonnes of corn must be shipped between March and August to meet USDA’s forecast. That would be the second-most ever, about 9% below the same period in 2018. That followed crop shortfalls in South America, something that is not off the table in 2021.

U.S. corn ending stocks are also seen at seven-year lows in 2020-21, though the situation is much less tight relative to demand than that of soybeans. This would not rule out additional corn export demand for the current year if South America does come up short, assuming the capacity is available.

USDA has the opportunity to update supply and demand outlooks on Tuesday, and analysts see U.S. carryout for corn and soybeans shrinking slightly from last month’s projections.

Inspection confusion
Market-watchers were somewhat frustrated on Monday when USDA’s corn inspection data showed a large 25% upward revision to the previous week’s total. This has been a theme over the past several months, but more so with soybeans than corn.

Within the last four months, there have been only five weeks where corn inspections for the previous week were revised upward by more than 6%. But those changes were large, adding between 16% and 26%. It is interesting to note that aside from the one ended February 25, the other four weeks fell during holiday periods: one during Thanksgiving and three during the Christmas through New Year’s time frame.

The soybean inspection total for February 25 jumped 14% on Monday, following rises of 11% and 14% in the previous two weeks.

It is not clear why these adjustments are so large, or if they are truly outliers in the dataset. But looking back on previous periods with elevated exports, such as October-November 2016 for soybeans and April-May 2018 for corn, large overall shipment volumes do not seem to be the culprit as the changes were relatively smaller at those times.

As an aside, USDA’s weekly export sales report, published on Thursday, showed weekly corn exports for February 25 at 2.01 million tonnes, within less than 2% of the revised inspection number issued on Monday.

USDA is hosting a free virtual Data Users’ meeting on April 14-15, which might offer a great opportunity to address these export questions in a public setting.

(The opinions expressed here are those of the author, a market analyst for Reuters. Editing by Matthew Lewis)